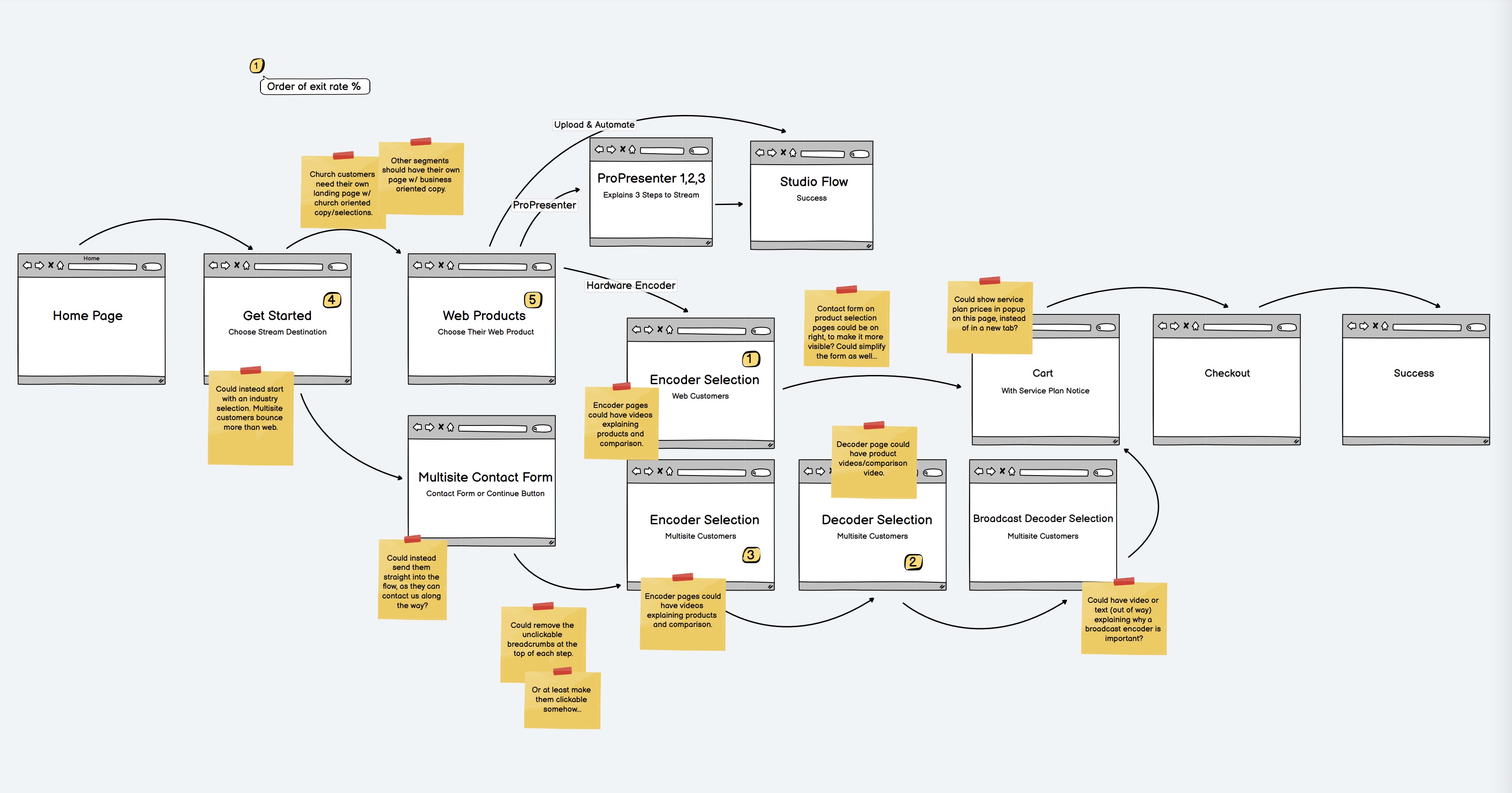 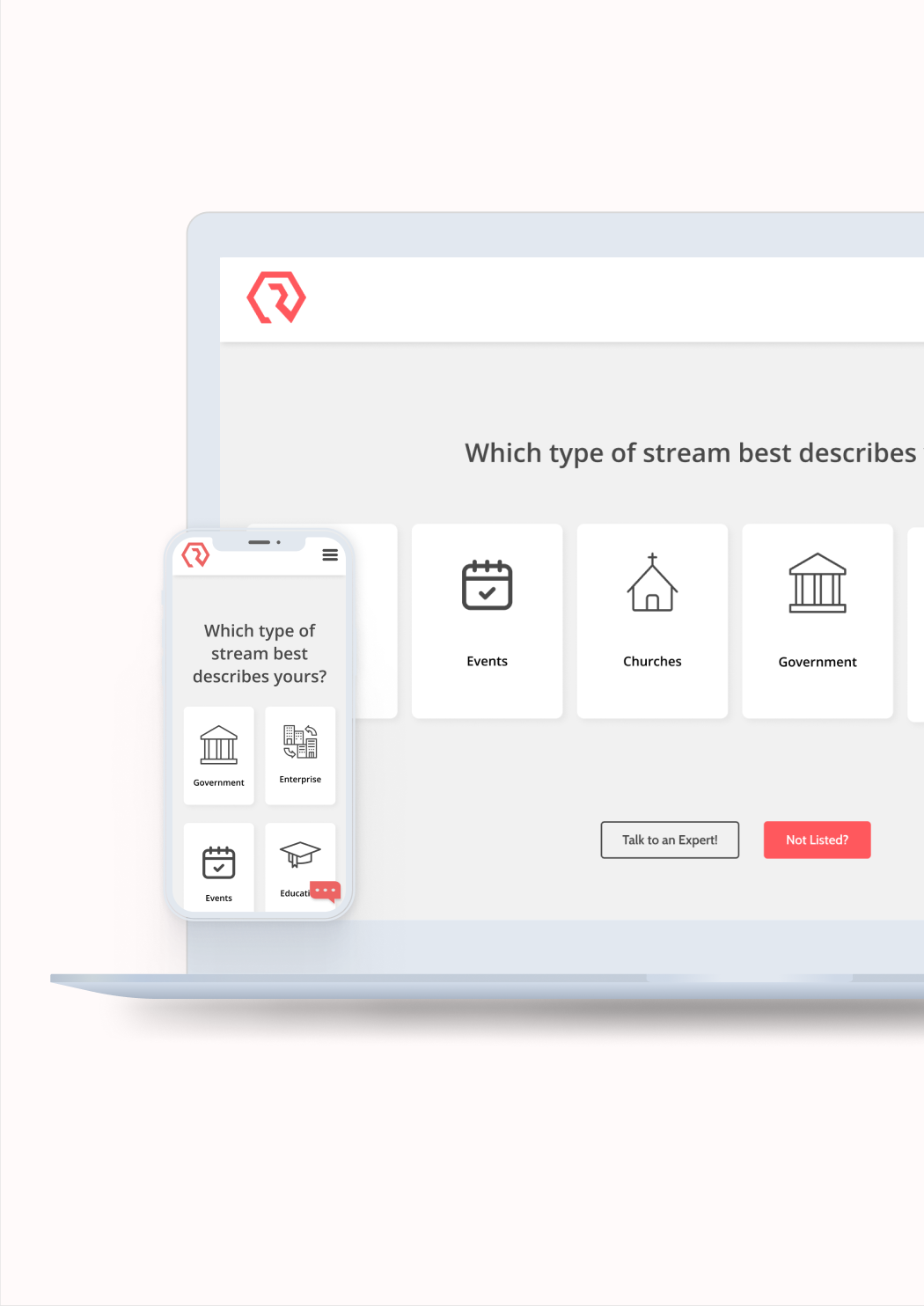 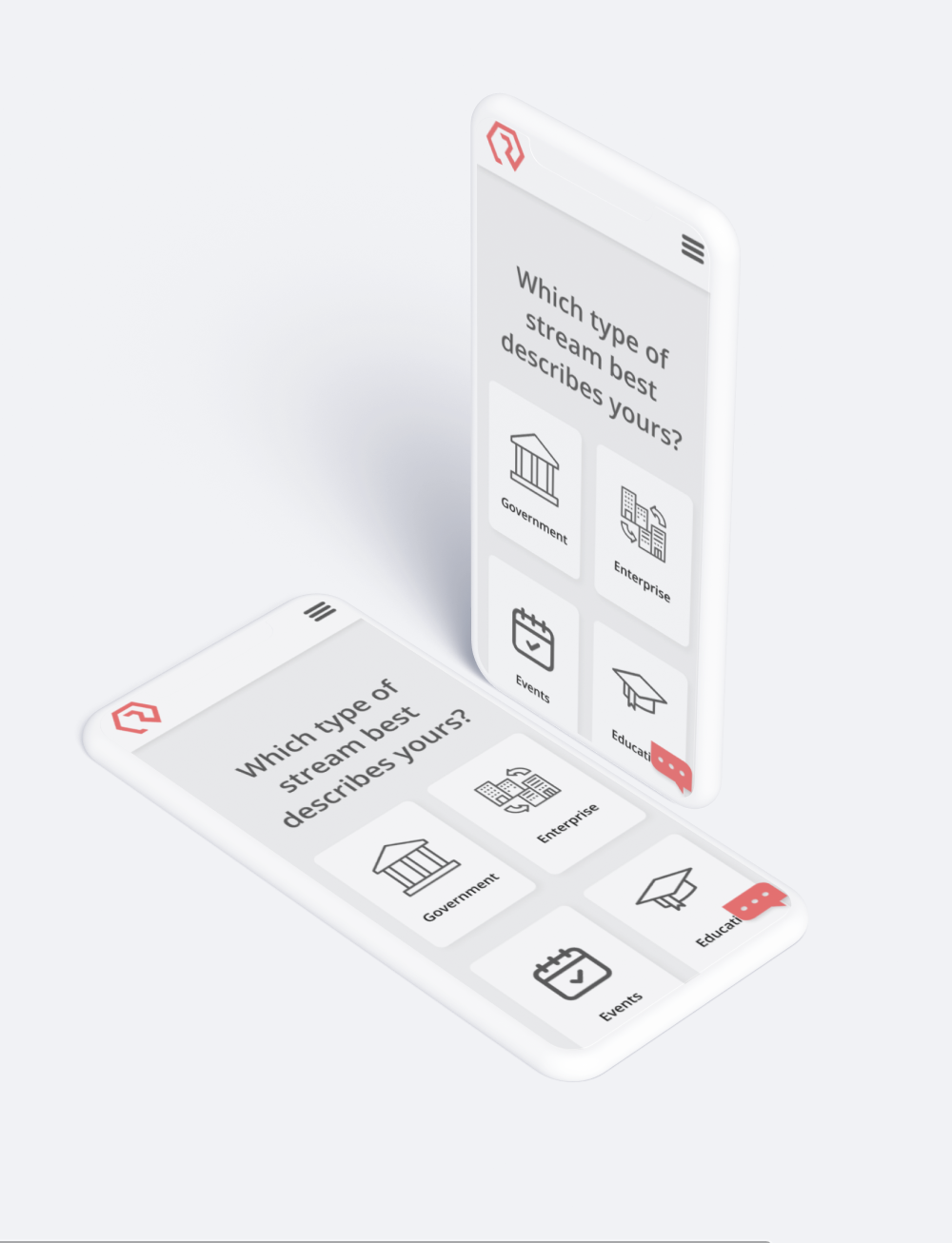 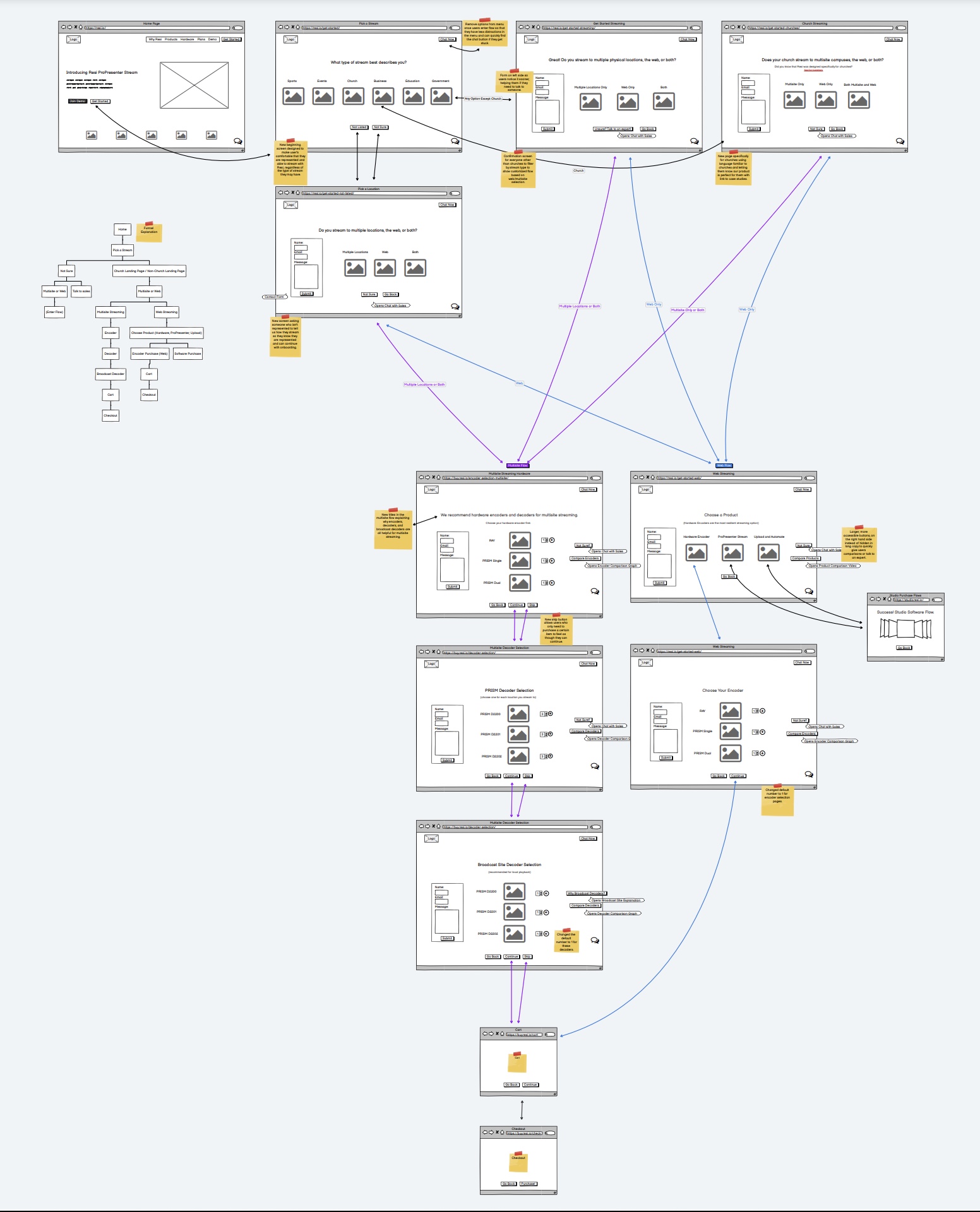 Resi is a streaming provider that offers world class streaming with zero buffering or packet loss. They mainly serve churches and houses of worship, but have begun to grow into the corporate and event-streaming industries more and more everyday.

Resi's flow for getting a new customer started from their website was struggling to convert. Users would get about halfway through the flow before abandoning, as they often times did not seem to understand what each product was or if the option was 'right for them'. The most important part of the funnel is making sure users understand they will be able to use Resi's product for their use case, which on launch was never brought into the design of the screens during the first half of the flow. User abandonment rates on launch  were simply unacceptable, and something had to be done about it. Discovering what the actual problem is for users was the first step. 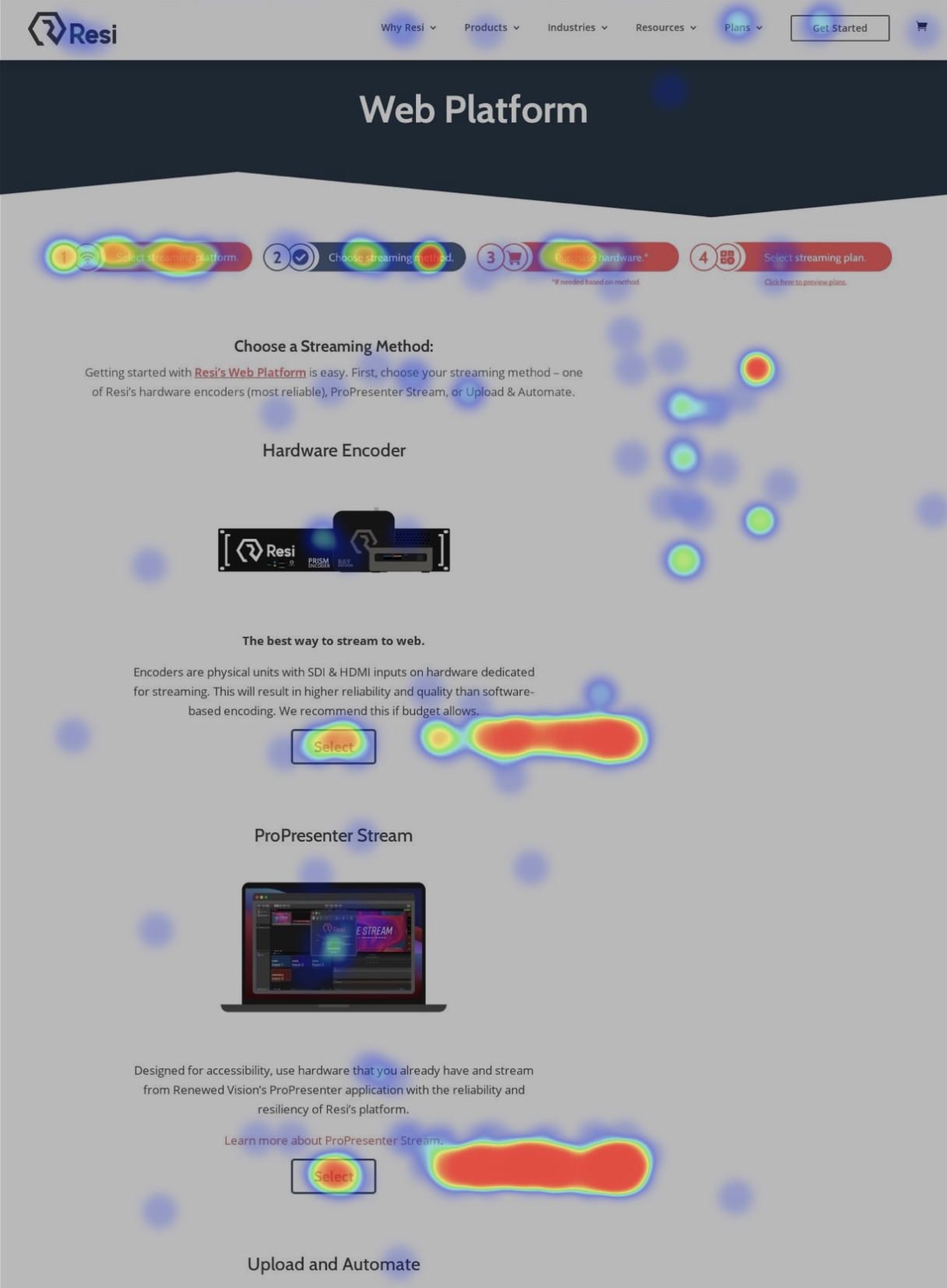 We developed 4 user personas based on Resi's current customer demographics. Chris, the high-budget large church broadcast director who wants the best of the best regardless of price. David, the pastor of a small-medium sized church simply looking for a better stream for a low cost. Jake, the medium sized church tech guy who often times balances multiple jobs at once, who is mainly looking for something that simplifies his life. And Sara, the event coordinator for a large event company who has plenty of money to spend but isn't familiar with much of the terminology or hardware offered by Resi.

We identified 4 users that fit closely within these personas, and I facilitated a user journey session for each to find out where the main pain points where and identify any areas of opportunity to improve the user's experience at any point from start to finish. 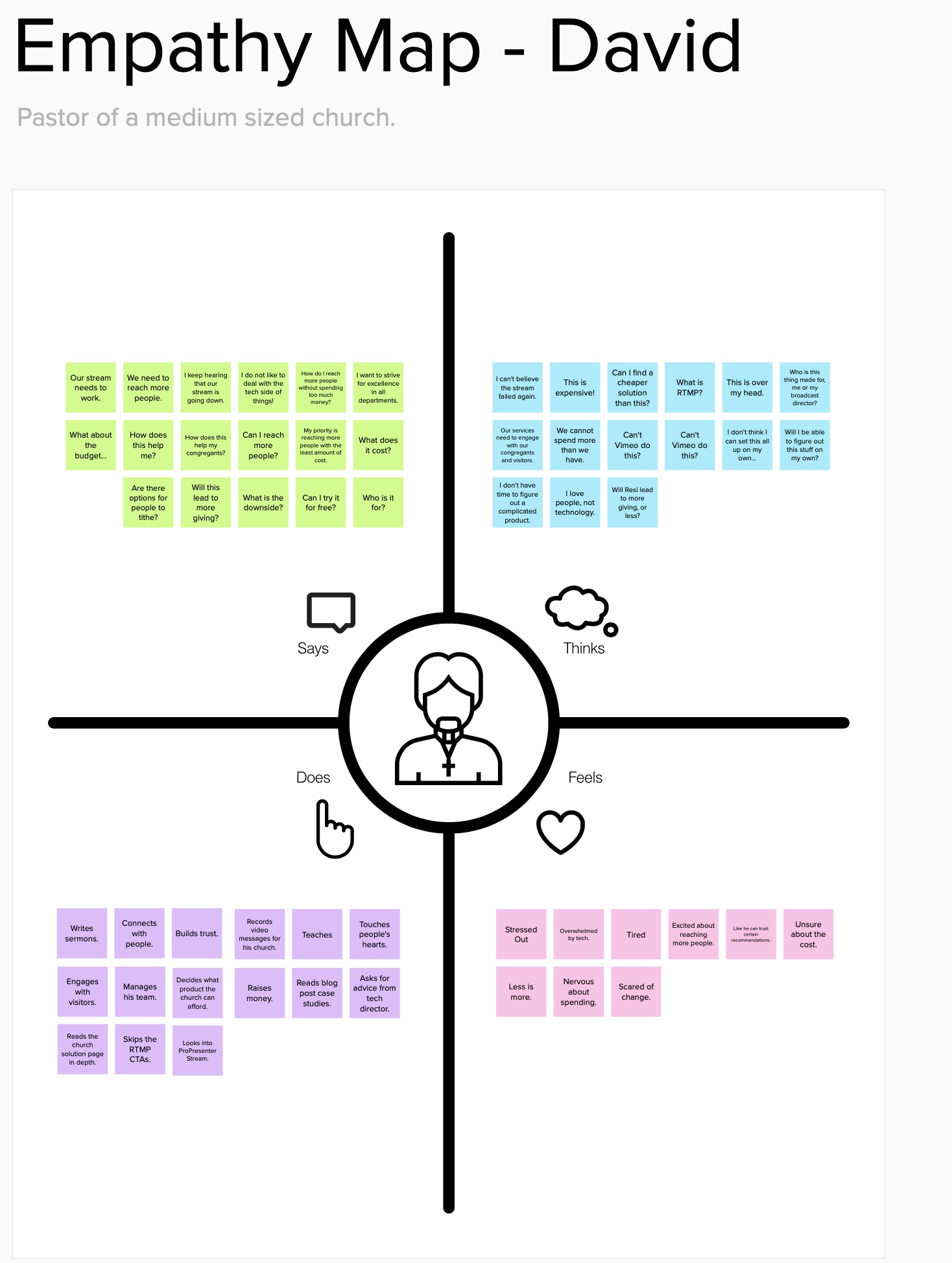 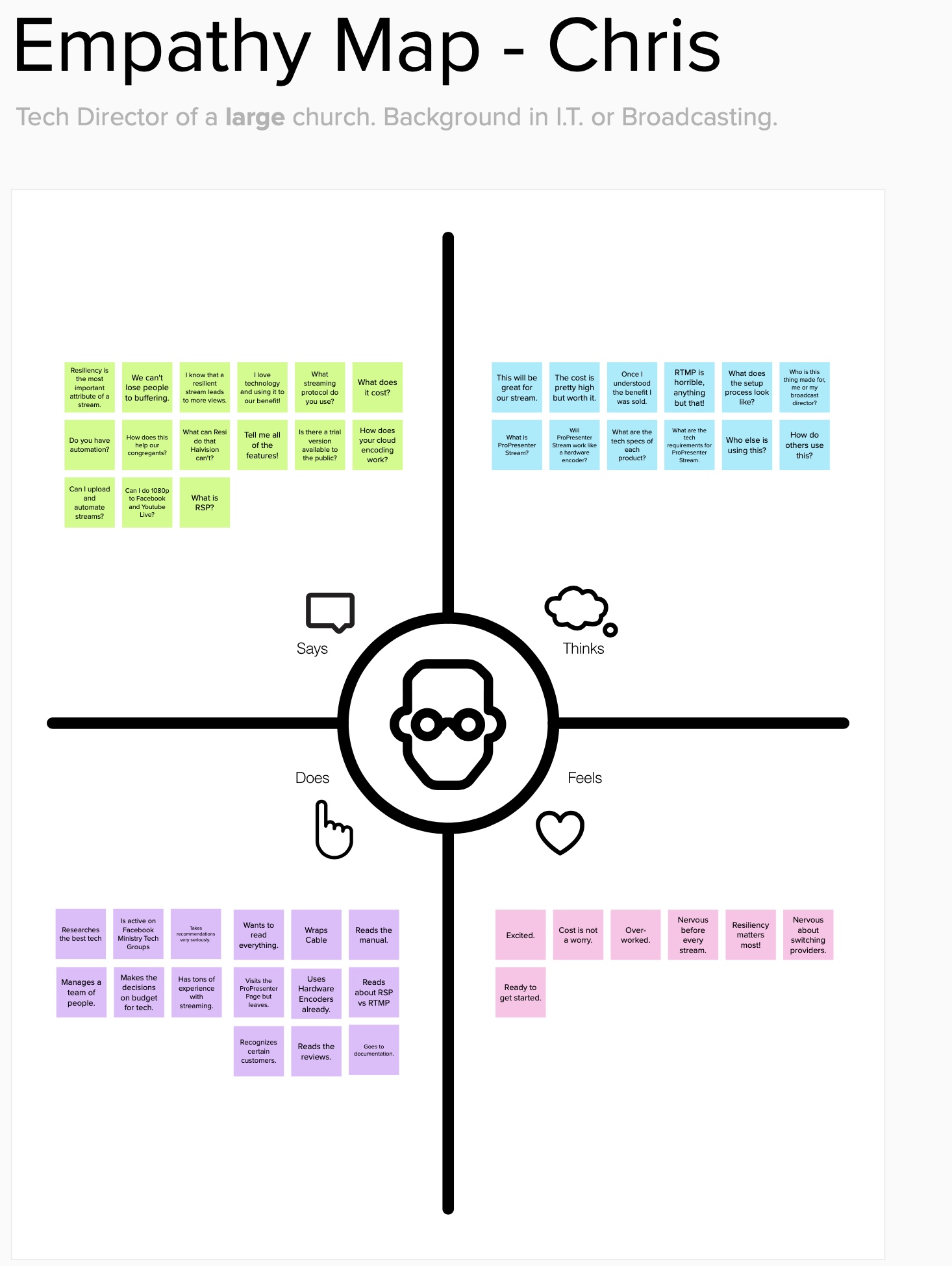 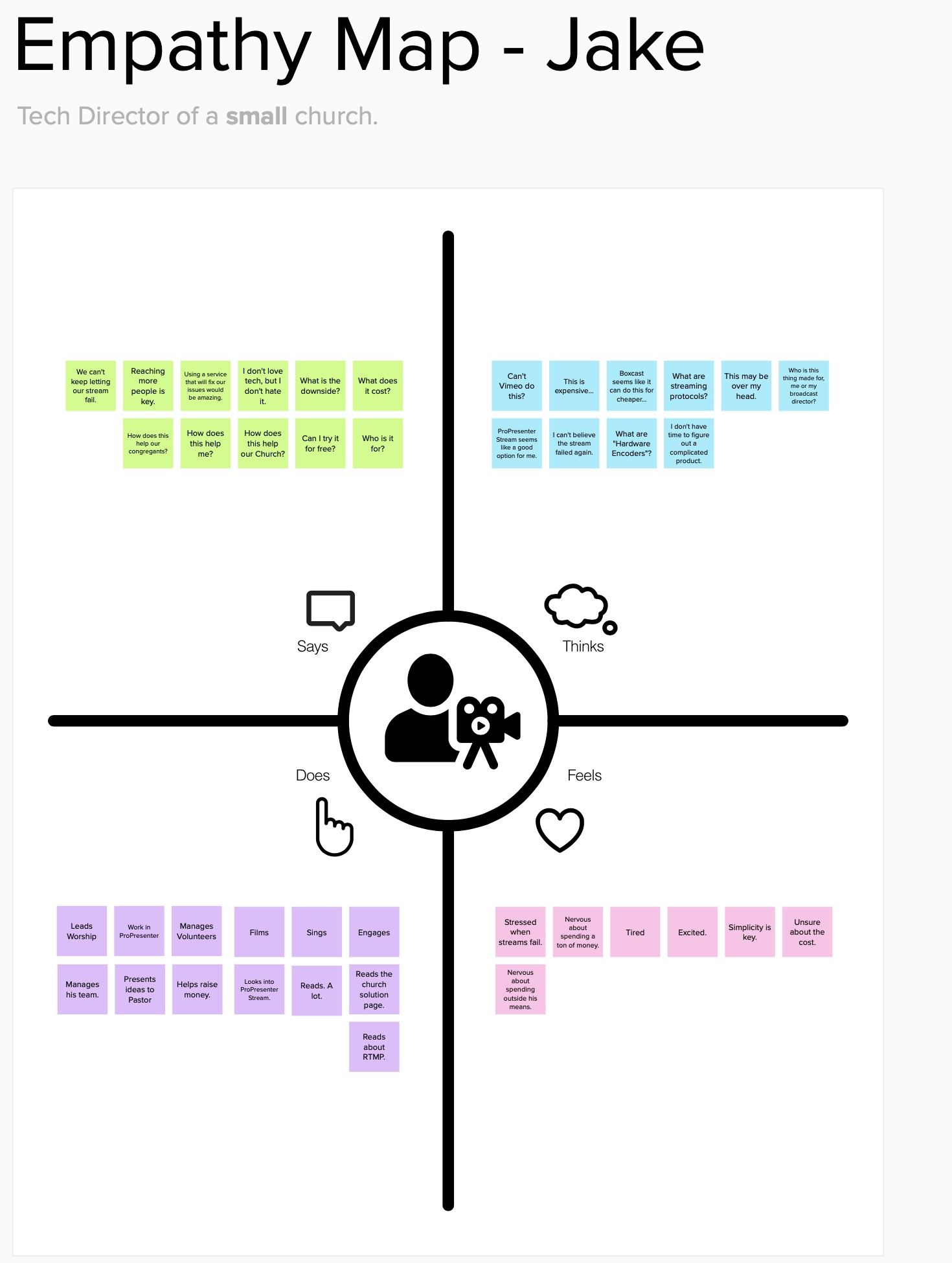 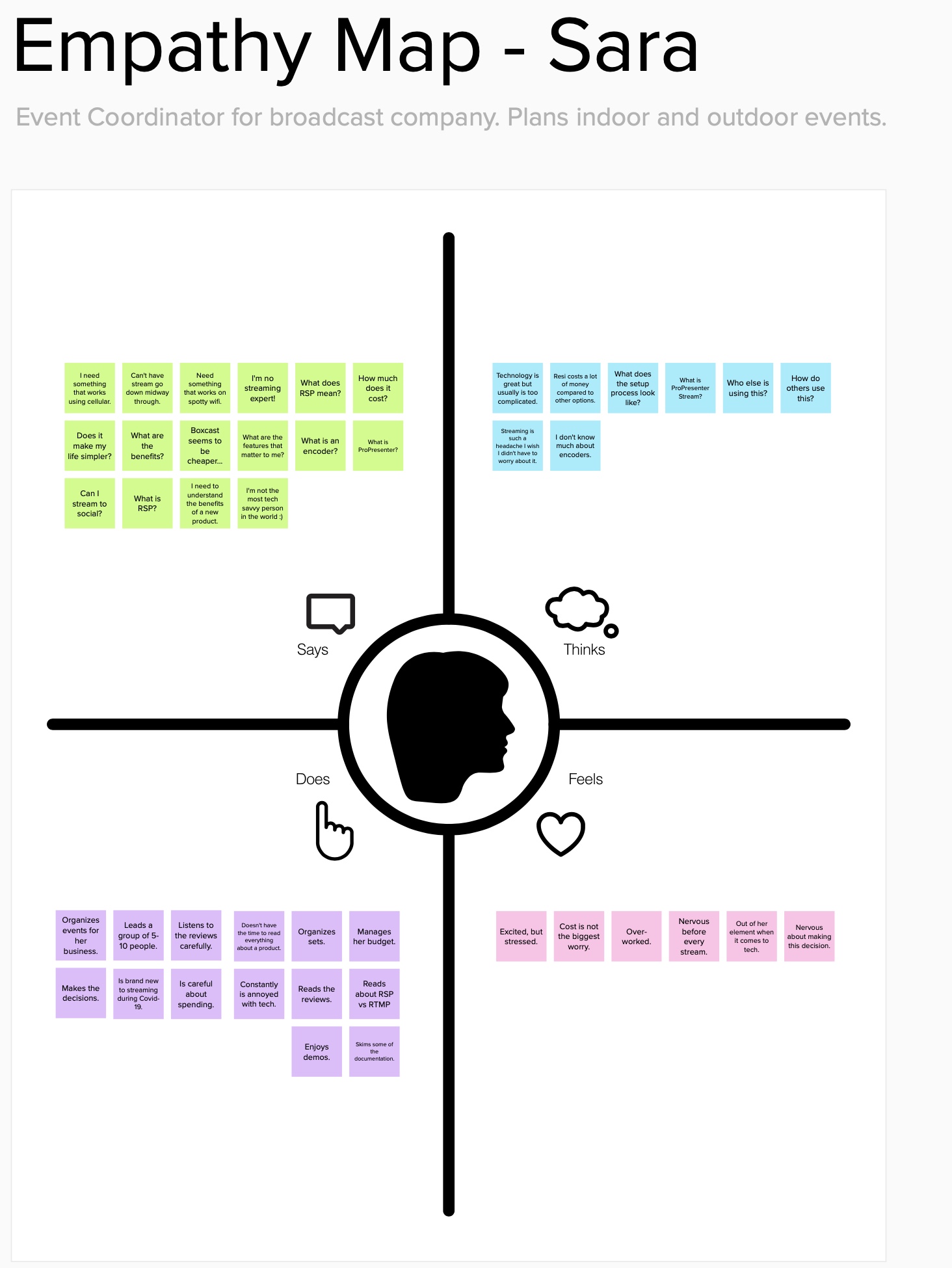 Our user journey map revealed new pain points and also some opportunities. The main pain points were lack of information, the lack of costs being transparent, and a misunderstanding of which product makes the most sense for each user. The areas of opportunity were pretty clear as well; we could have videos on the product pages, a comparison video to explain each product's use cases, and custom tailored language for different industries on early screens. 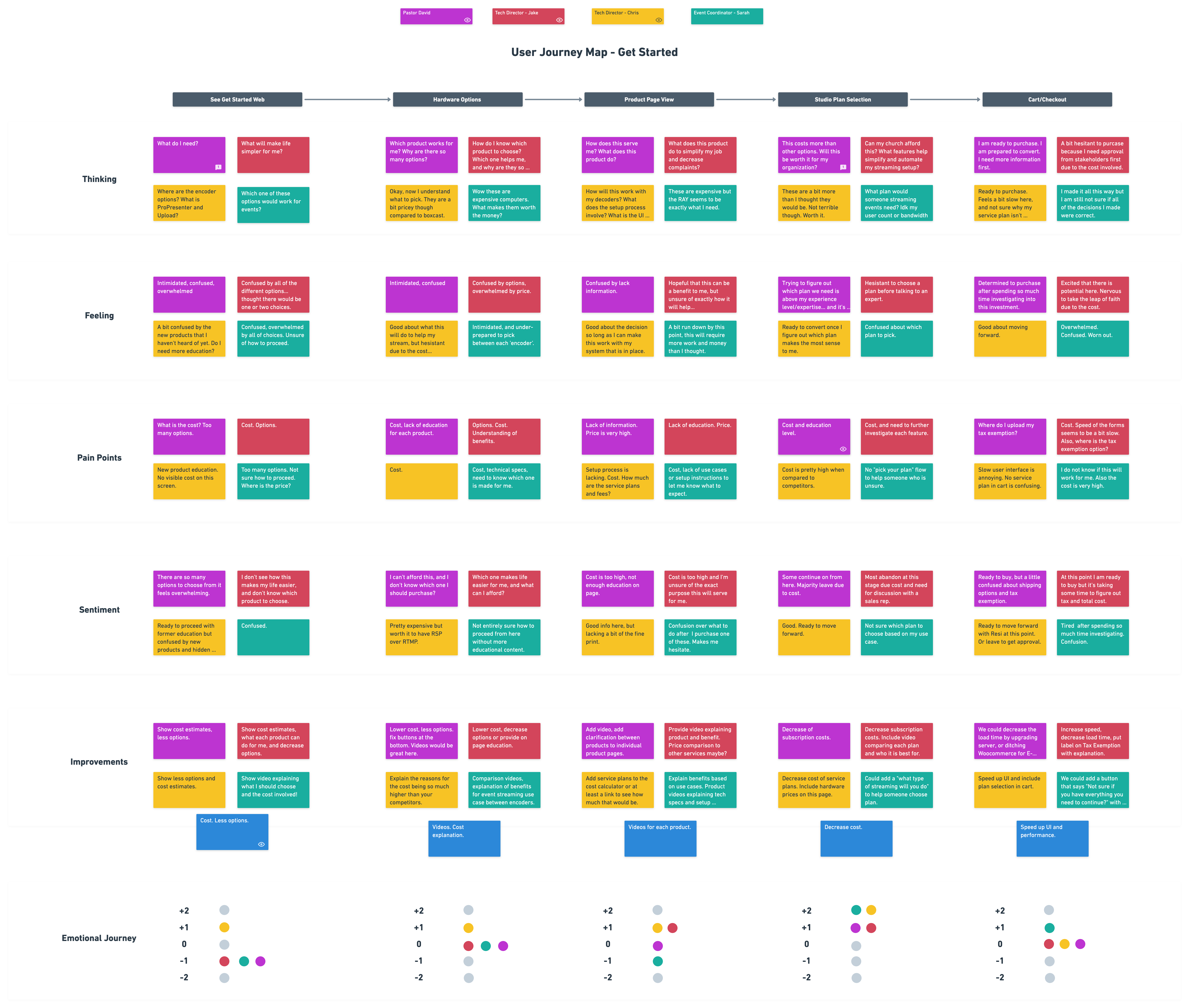 Once we identified the pain points, we put them on paper to discover a solution. The problem that was identified to us during our user journey session review, was that we did not provide enough information on each product and did not show use cases during the get started flow. I didn't really expect lack of information to have been the problem. so this came as a bit of a surprise to me. I proposed a solution of adding product videos on each product selection page, and a comparison button that would show users a quick video comparison between each product, with use case explanations included in the video as well. The key is creating video content for users to digest the information easily, as well as the large comparison tables we were using before (for our "Chris" users).

The next solution I proposed was completely redesigning the first page of the flow. Before, the first page simply asked the user where they wanted to stream to (web, multisite, both). Most users got confused here unless they were already familiar with church streaming lingo (multisite is not a commonly used term used outside of the church world).

The solution I proposed was a new starting page that asks users what kind of streaming they want to do first. Then, if they choose church, they see the church language on the next page asking them where they want to stream to (as well as a message saying Resi was designed for churches just like them!) and if they chose a non-church use case, they saw the term "point to point" instead of multisite and had a lot more guidance on what each product is used for during the next few screens. 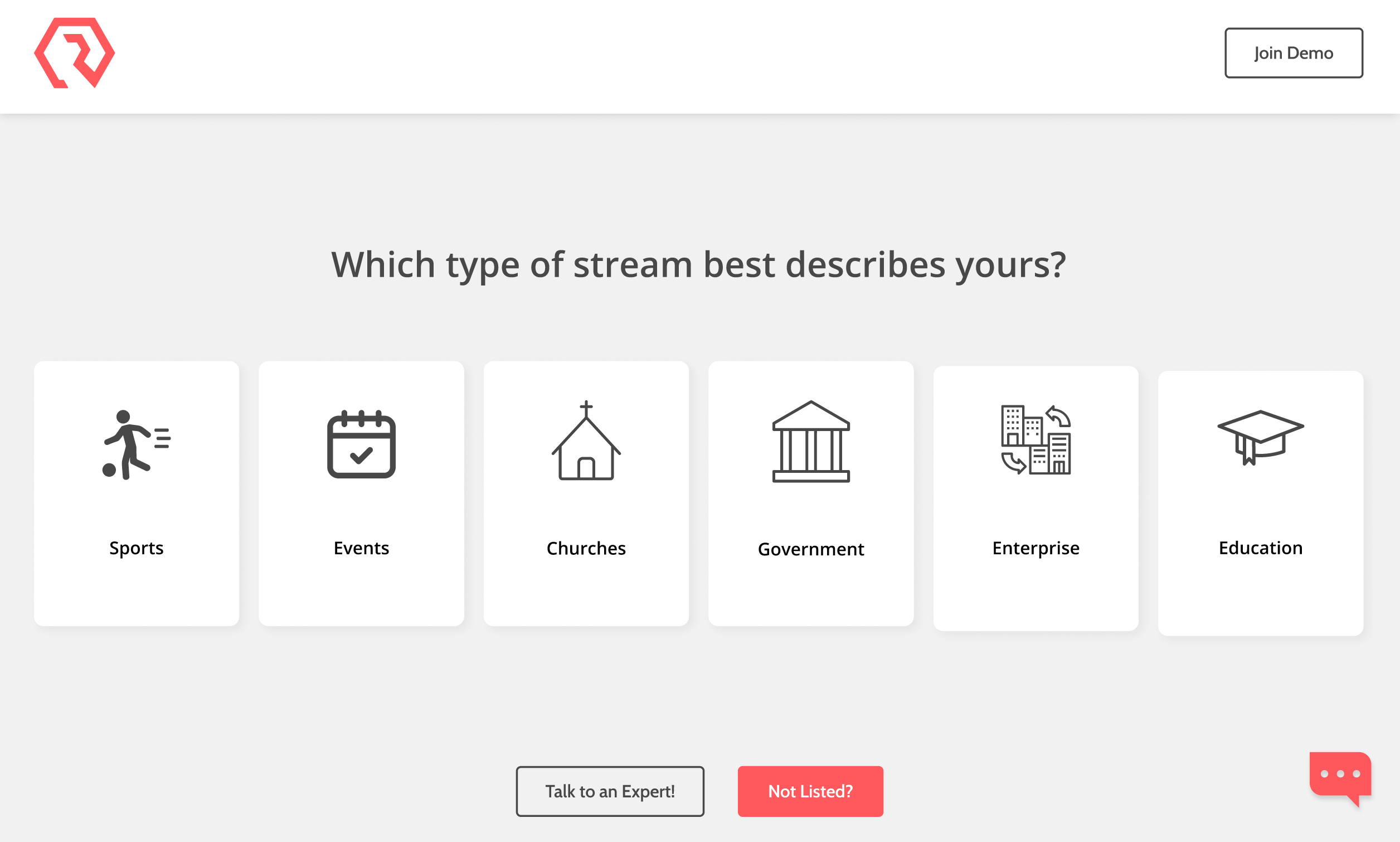 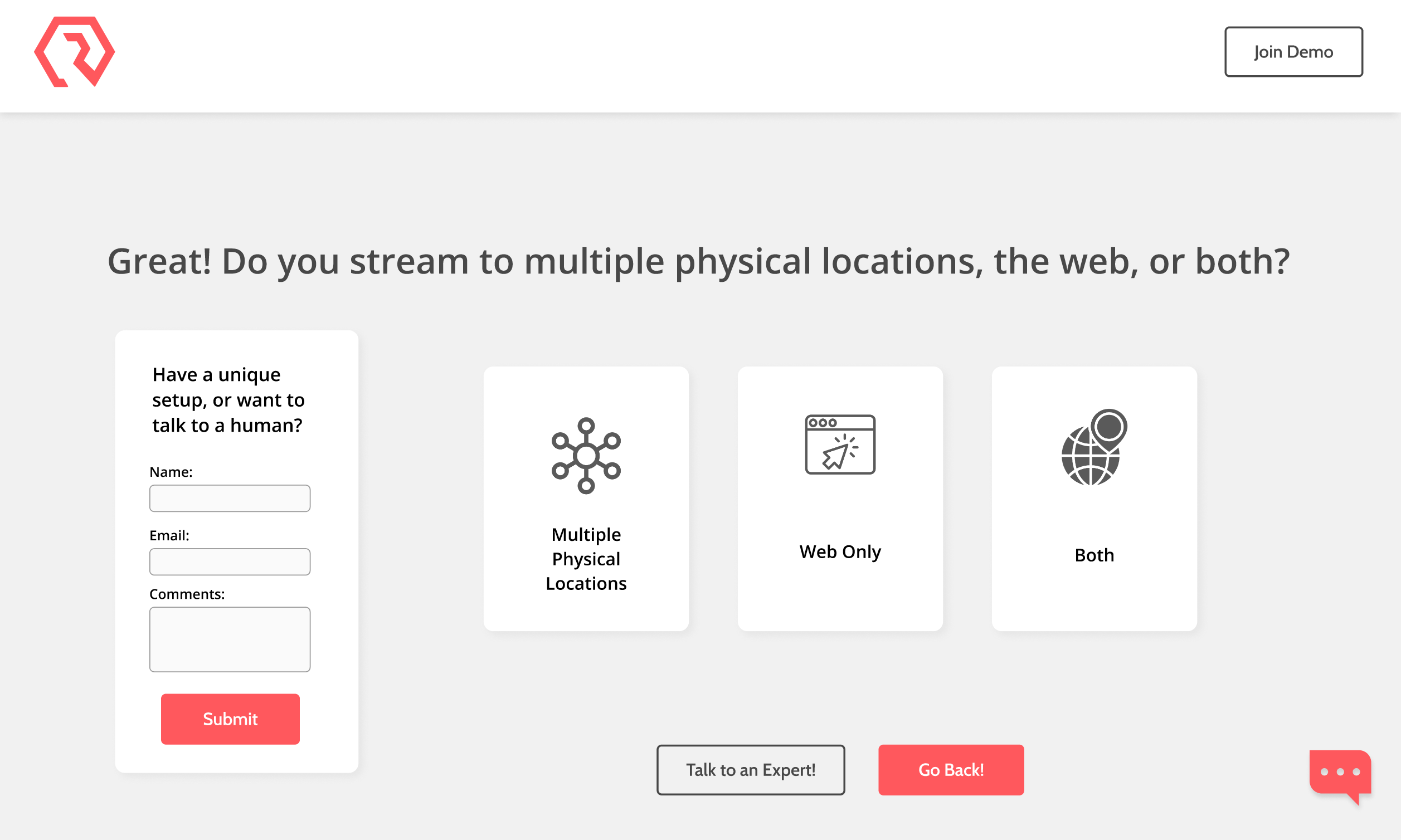 I tested the prototype on 3 different users. One was a church tech director, a "Jake", persona type. The other was a former event coordinator and middle aged woman, who  resembled our "Sara" persona. The last was a total streaming outsider, a business owner looking for better ways to stream his conferences. He did not fit a persona, but provided a complete outsiders point of view for testing purposes.

The tests went great! During the prototype testing, if a user clicked on the comparison video button, we explained the differences verbally to them (as the video was not ready yet during testing). We also told them verbally that when they clicked "add to cart" they successfully added a product to their cart as our low-fidelity prototypes did not have an animation to show them the button was responding.

This solution definitively showed better responses and success rates than the previous flow. Users completed the flow in an average of 50 seconds, where the previous flow design took users over 10 minutes on average. When a real user uses the e-commerce flow, there definitely will be an expected increase over the 50 seconds as someone would take much more time making sure they aren't about to make a bad purchase. But the fact that none of our test users got "stuck" where they didn't know how to continue, was great.

The result was a redesigned get started flow that helped users find the right solution for them by default, rather than making users leave the flow to do more research. The test results, as well as the overall impressions from multiple persona types, showed us that the new starting pages and comparison videos really helped the user feel as though they were in the right place.

A solution that is tailored to each person's lingo also showed to be a great improvement, as before we only used church industry language during the flow which alienated all of our non-church website visitors. One of the solutions I initially recommended, which was to get rid of the contact form, was shown to be a mistake as most of the users we asked found it helpful. So I added the contact form back into every screen in the final design. Although this solution has not been launched on the live website yet, it is great to know that we have come up with a solution to the problem that should increase conversion rates and decrease user abandonment once implemented! 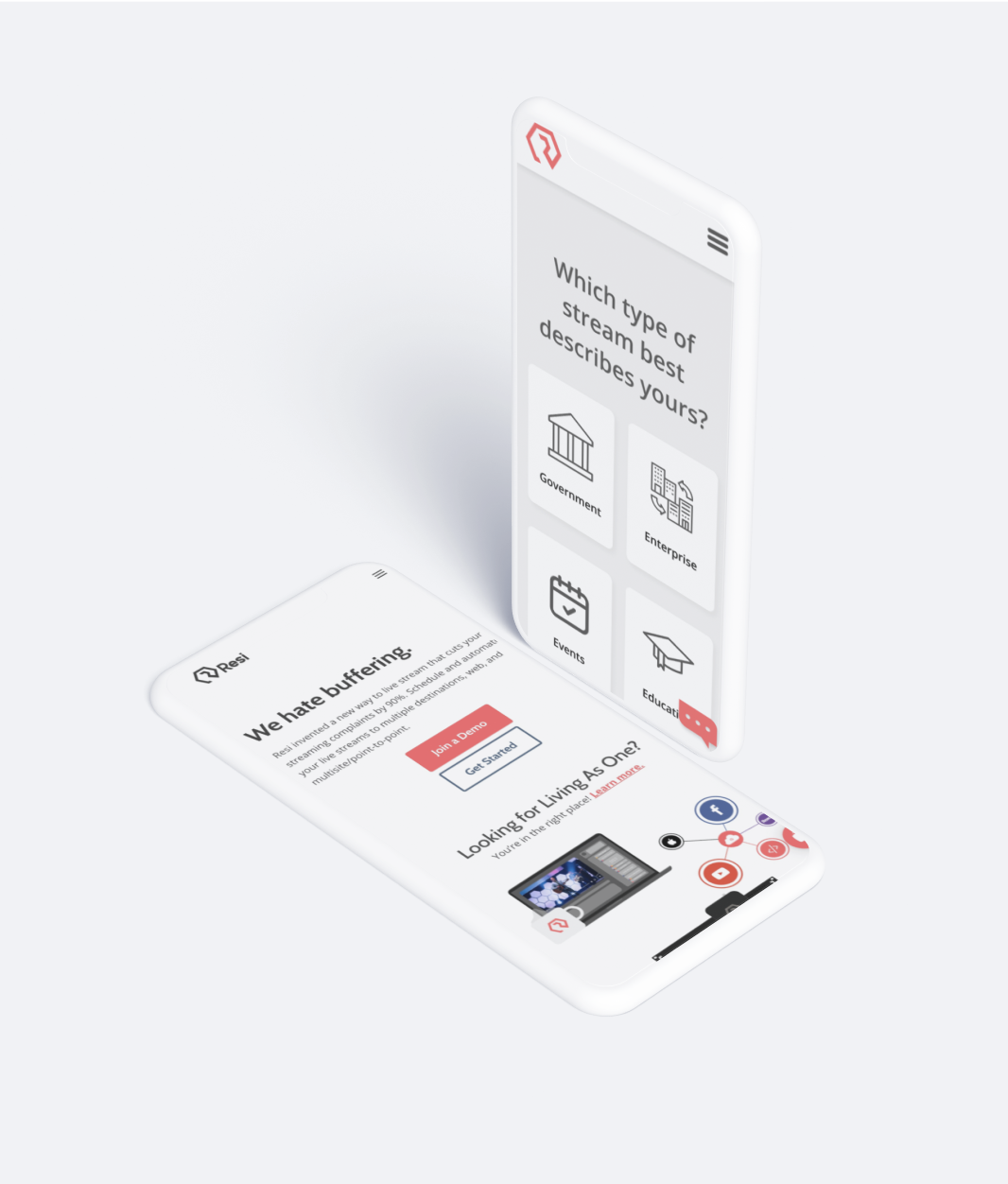